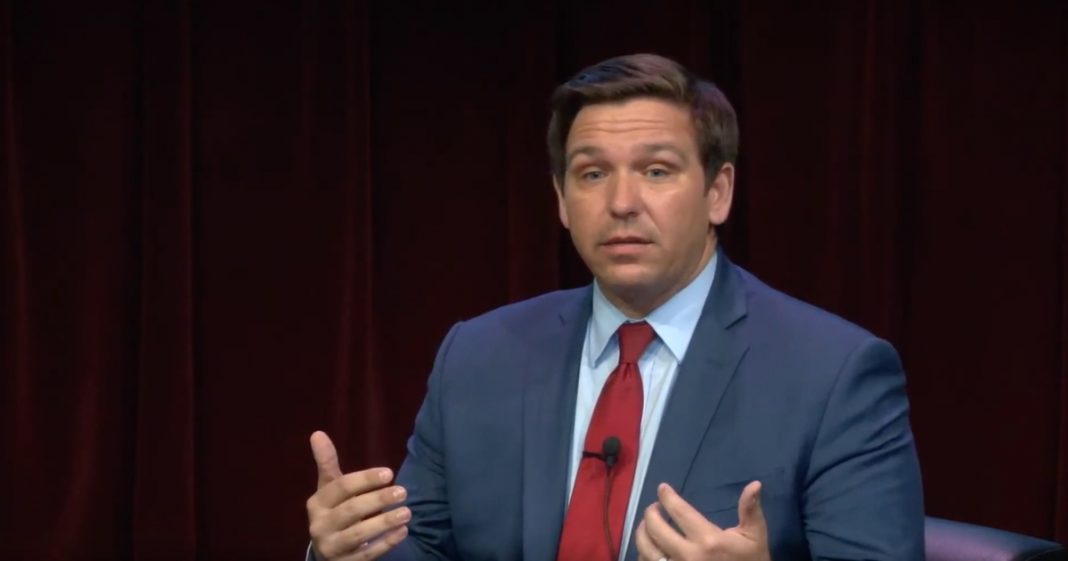 Ron DeSantis is under constant attack from the Left.

Even fellow governors looking for press clippings are going after him.

And one Democrat governor humiliated himself again trying to “clap back” at Ron DeSantis.

Gavin Newsom, the Democrat governor of California had one laughable message for DeSantis.

Newsom wants to be President but he keeps failing his auditions.

Joe Biden is an utter disaster whom nobody wants to see again in 2024, and Kamala Harris has predictably flopped as VP.

None of the other also-rans in the Democrat field from 2020 have any broad appeal.

So Gavin “Governor Hair Gel” Newsom is testing the waters.

He got humiliated once again in the dust up he started when he released a desperate attack ad aimed at Ron DeSantis begging Floridians to come back to California.

We’re about to celebrate Independence Day — but Freedom is under attack by Republican leaders in states like Florida.

It’s time to stand up. Don’t let them take your freedom. pic.twitter.com/cFI5UzgZzX

In a follow-up interview on the Los Angeles TV KTTV’s program “The Issue Is,” Newsom was asked by host Elex Michaelson, “An ad came out about Ron DeSantis from your reelection campaign, an ad that aired in Florida …What was behind that idea there and for people that say it looks like you’re running for president because you’re running that. What do you say?”

Newsom responded, “That was an ad from a frustrated father of four, a son whose mom worked to raise money for aid to adoption of special kids, someone who works to get people with intellectual disabilities in positions of influence in state government who was disgusted by the Governor of Florida, Ron DeSantis for attacking the Special Olympics and threatening them with tens of millions of dollars in fines. I couldn’t take it anymore. He’s going after the gays, going after people, othering people across the spectrum, going after vulnerable minorities. I can’t take it…Stop being a bully, stop belittling people that look differently, act differently, love differently. Who the hell are you? Stop. Stop threatening people.”

Newsom is entirely full of it.

His assertion that DeSantis was “attacking the Special Olympics” is absurd.

The Special Olympics tried to force competitors to take the COVID vaccine against their will, and DeSantis protected them.

Christina Pushaw, DeSantis’s press secretary explained, “The only ‘bullies’ here are the organizers who tried to force athletes with complex medical needs to take shots, even ignoring medical exemptions. Governor DeSantis stepped in to defend the athletes, and now we’re having an inclusive Special Olympics in Florida! Sit this one out. Governor DeSantis stood up to Covidian bullying to ensure that 70 Special Olympians can compete despite not being vaccinated. Meanwhile — your Covid bullying has driven hundreds of thousands of Californians out of your state, including myself.”

Newsom has repeated the Special Olympics lie because he’s a dishonest empty suit of a politician.

Pushaw added, “Also, your wife is a vaccine skeptic, so maybe you should ask her how she feels about people with special needs & complex medical conditions being FORCED to take shots in order to compete in the special Olympics? I doubt she would stand for that, if it involved your own family?”

DeSantis also responded to Newsom and pointed out the fact that people are leaving California in droves.

He said, “Everyone wants to talk about me in Florida…I can just tell you this. I was born and raised in this state. And until the last few years, I rarely, if ever, saw a California license plate in the state of Florida. You now see a lot of them. I can tell you. If you go to California, you ain’t seeing very many Florida license plates.”

People are voting with their feet, and they are rejecting Newsom’s far-Left agenda.