Antifa terrorists issued one infuriating threat to an independent journalist

The Democrat Media Complex refuses to talk about Antifa.

The far-left group has been allowed to operate with few repercussions.

Nobody in the country has done more work exposing the domestic terror group Antifa than independent journalist Andy Ngo.

Ngo has reported extensively on Antifa’s crimes and ideological aims, and for that he’s been targeted by the group.

Portland is ground zero for the American faction of Antifa, an international order of communist terrorists.

And Antifa issued another threat toward Ngo by calling for his death in graffiti on public property.

Ngo shared in a Twitter message, “Portland: In front of the still fenced-off US federal courthouse that antifa tried to burn down in 2020, someone wrote the command, ‘Kill Andy Ngo.’ A blood-like streak is included. This isn’t the first time they’ve made this threat, but as before, I won’t stop reporting on them.”

Portland: In front of the still fenced-off US federal courthouse that antifa tried to burn down in 2020, someone wrote the command, "Kill Andy Ngo." A blood-like streak is included. This isn't the first time they've made this threat, but as before, I won't stop reporting on them. pic.twitter.com/LCAZHHdM5H

One Antifa account posted on Twitter “Beautiful” at the sight of the graffiti, and another posted, “Lets [sic] hope someone does.” 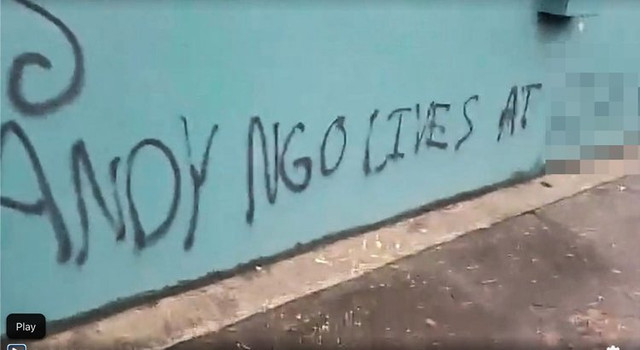 And these are not idle threats.

Antifa thugs ambushed Ngo and attacked him to the point where he was hospitalized for brain injury.

They were invested in the lie that Antifa goons were simply “anti-fascists,” or just a “myth” as Democrat Congressman Jerry Nadler put it.

And last year, a pack of Antifa jackals hunted down Ngo and assaulted him in the middle of the street.

They might have beaten him to death if someone hadn’t intervened and allowed him to escape.

NY Post has published an excerpt from the update of my book & videos of #Antifa hunting me in Portland on May 28, 2021. I name one of the ringleaders of the attack: Elizabeth R. Richter. She chased after me & rallied others to attack the hotel where I hid.https://t.co/qOKzR3gUY0 pic.twitter.com/CtK4vO6Dfm

Portland is so far down the road of insane leftism, progressive Mayor Ted Wheeler is considered a fascist.

He won re-election against a woman who called herself the “Antifa Mayor,” and the only reason she lost was because the communist vote was split by a candidate to her Left.

Ngo’s reportage on Antifa has been invaluable.

People on the Right, and perhaps more importantly people on the center-Left, need to understand just how dangerous and radical Antifa terrorists are.