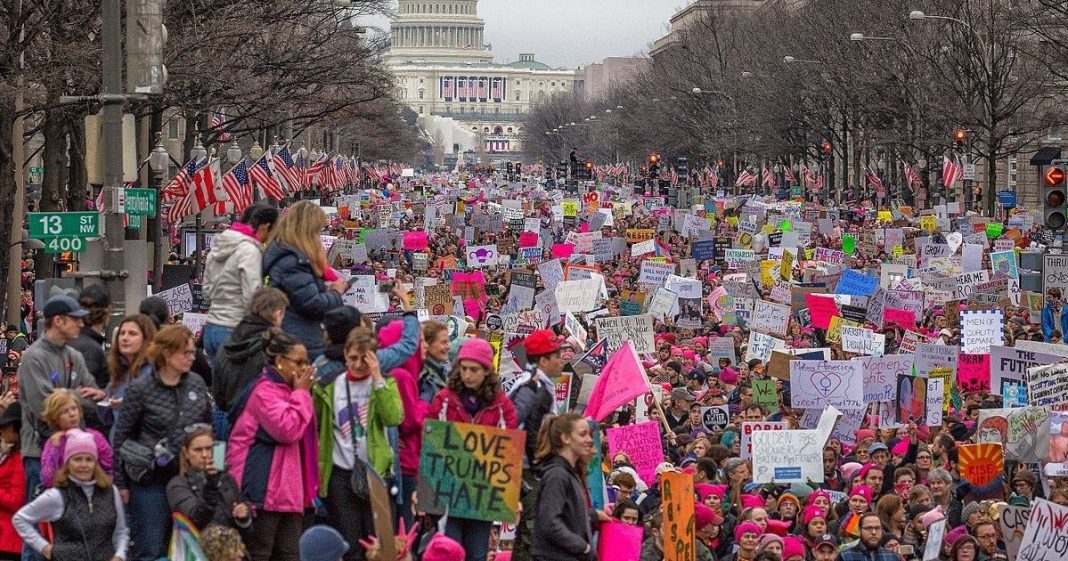 For all their platitudes about “strong” women, those on the Left sure don’t like the real thing when they meet it.

Apparently, a few journalists from one of the nation’s largest newspaper chains have figured out that conservative women aren’t all cowering from their chauvinistic, white, male overlords.

You’d think that would make them happy, but in reality it has them spewing vitriol toward these women.

The trio of reporters from one of America’s fastest failing media companies can hardly contain themselves as they describe a terrifying scene at “the west lawn of the California Capitol” one day which “resembled a back-to-school fair as moms huddled around booths set up along the sidewalk.”

They were scandalized that while it resembled a school fair, “Instead of brochures on lunch programs or sports teams, volunteers distributed packets and flyers on how to fight government tyranny.”

Somehow, since it was on the Capitol lawn, the government theme seems more logical than sports team sign-ups, but it’s likely the “journalists” simply couldn’t understand how these woman they want to turn into right-wing terrorists of some sort could seem so normal, calm, and confident.

They go on to share that one woman at the event passed out homeschooling packets with information about a picture book called, “The Tuttle Twins Learn About the Law.”

Another had the gall to wear a tank top that said, “Just a Regular Mom Trying Not to Raise Liberals.”

They were even more horrified later in the day when they found an event with one hundred moms staging a sit-in against “public health requirements.”

With that kind of writing, is it any surprise McClatchy had to file for bankruptcy in 2020?

Those moms weren’t protesting some sort of vague “public health requirements” – they are dead set against COVID-19 vaccine mandates.

But our intrepid journalists can’t spell that out plainly because anybody who knows anything about California has a pretty good idea right-wing extremists aren’t the only characters skeptical about injecting who-knows-what into their arms.

Back to that brilliant piece of journalism, the reporters argue “To anyone following right-wing and conservative activism over the years, the scene would be startling. Male-dominated groups like the Proud Boys, Three Percenters and Oath Keepers often steal the headlines in stories about political extremism. But women, experts say, are becoming powerful leaders in radical circles.”

Or perhaps the real story is that certain journalists and academics think anyone on the Right of AOC is a radical extremist.

Somehow, the majority of America’s so-called “journalists” and “experts” seem to have forgotten that about half the country voted for Trump in the last Presidential election.

America’s political center is not Marxist ideology, but somewhere closer to a conflicted Californian who voted for Biden for President and a Republican Congressman at the same time (and lived to regret the Biden vote).

Once upon a time, journalists would walk up to women like those in the McClatchy article and speak to them like reasonable human beings while asking for their honest opinion about how their government was treating them.

Maybe someone should tell them the pay was better back then because people actually wanted to buy the newspapers.